Sunday Memories: Diaspora
In The Key Of Life 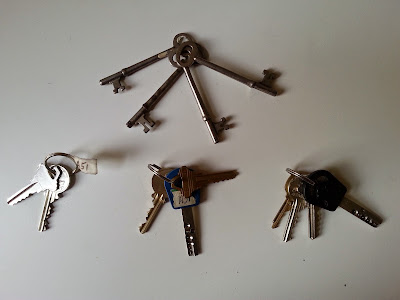 These got surrendered to the person who is making a new home.

There is no way to walk away from an internal hope that home might for a brief second feel like it once did.

Except to put keys on a table and, after lengthy and heated discussions, push them into waiting hands.

Florence, too, pushed, keys to new homes across many tables into waiting hands.

She said, "Why don't you keep a diary?"  I was 12.  It was learning to risk a full sentence.  It was a bridge over a moat of silence.  It was a coat of armor in the middle of battles.   It was a way out of hell.

She said, "Go see this movie.  It's important."  I was 13.  It was Jules Et Jim.  It was 8 1/2.  It was A Man And A Woman.  It was the unexpected moment when I suddenly saw for the first time what my thoughts looked like.  It was important.

And there were keys she didn't realize she was giving.  Like the ones to my own home, found after months of wandering from place to place, the fight between us too permanent,  that even though I still had keys to her home, that door was no longer mine to open.

Years later, those keys had to become my sister's and mine so Florence could be safe in her own home.  Pushed across a table made of lost health and a failing mind.  Given reluctantly, given in fear, given barely trusting, given away and given up.

Yet, in surrendering those keys, the home she had always lived in became a home filled with mothering she had never known before.  Those keys that once locked her door now opened it to care and nurturing and love. It was, finally, the home she had secretly dreamed of.

Whether any of us knew it or not, those keys were her last gift to us.

Because after those lengthy and heated discussions, those keys got pushed into new waiting hands, and in return, checks got pushed across the table to us.

And suddenly there were keys to a world only dreamed of, only seen in others' lives, only imagined.

After so many Mother's Day she scoffed at, not wanting to be thanked for giving birth or raising us, the most surprising gift she ever gave was the most motherly thing she ever did.

A way to a home that began to feel like home once did.

Another Sunday Memory, Another Mother's Day


The Exhaustion of Diaspora: Part Six - Home Where My Love Lies Waiting*


The Exhaustion of Diaspora: Part Five - " It's The Pebble, Not The Stream"*


The Exhaustion of Diaspora: Part Three - Even The Baby Chair Is A Transient Moment

The Exhaustion of Diaspora: Part Two- The Ladies of the Pizza


Sunday Memories - The Exhaustion of Diaspora: Part One

Faster Than A Cable Car Going Down A Hill