The Delight Of Being The Shoe On The Other Foot 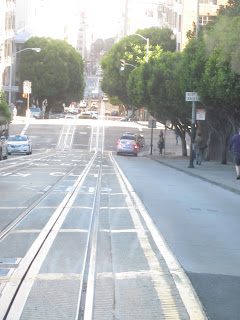 There was once a contest series in New York Magazine or the Daily News or maybe it was the Village Voice when it still had a voice.

Because the internet wouldn't be invented for another twenty or thirty years, each week you mailed your answers in on an index card.

One week the question was:  What could New York use more of?

I wrote in:  Less tourists.

Little did I know what the future would bring.  I also did not win.

In the rare travels away from home - home now defined as a few blocks' radius and an apartment as rare as the dodo bird - activities have been kept to family care and visits.  And the amazing Goodwill store near my father's garden apartment.

But love is impossible to say no to and after a plane ride to a city, often considered in the same breath as New York and one of the only two places Florence ever flew to, we joined the crowds of tourists tromping from one pretty attraction to another.

And as rickety old cable cars threw themselves down hills that were straight out of ancient video games or some prehistoric comic book we all screamed and cheered and interrupted the peace and quiet of neighborhoods sick of people like us.