When All Was Said And Done 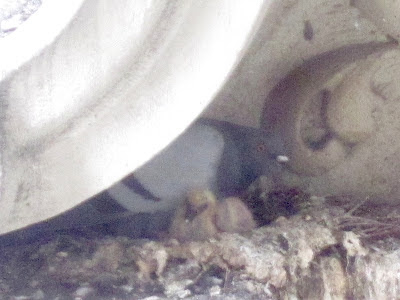 There was trouble in the corners.  Mothers were roosting on eggs that weren't hatching.  Nests were being abandoned, and for weeks, fights were breaking out.

One nesting spot that had always been filled with babies from spring to late fall remained empty.  And in the other corner, one mother didn't move for months, no matter what the other pigeons did to her.

I thought about the canary in the mine, the bird dying to give a signal to the miners that they too were in danger.  Watching the sudden break from almost four decades of consistent breeding, I wondered what these pigeons might be telling us.

Then this morning, movement not seen in a while but quite familiar in the other corner, the one where several failed eggs still remained, there she was, proudly and fiercely feeding one of her baby chicks.

Sunday Memories:  What The Stork Brought