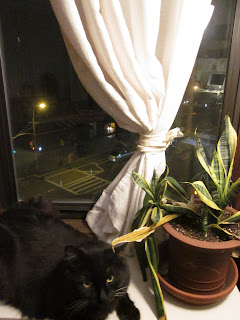 And Jupiter, approximately two years old this month, has me.

I did not quite understand this until two years into what promises to be one of my longer relationships, I noticed he had trained me to do the following:

* play with him when he wants to play
* not play with him when he doesn't want to play
* wake up when he wants me to wake up
* cuddle when he wants me to cuddle
* feed him what he likes
* not feed him what he doesn't like
* be polite about his displeasure at me preparing to leave the house
* share my popcorn with him
* throw the ball and then fetch it for him. Repeatedly.
* yes he will go on the kitchen counter and what do you mean not the stove
* move the bureau so he can crawl under it
* open the curtains
* open the window
* type with one hand because he needs me to scratch his ear with the other


As the Con Edison Meter Reader Lady said as she stepped over him to get to the meter, "He doesn't have to move. It's his house."

Two years ago, nobody warned me. Now it's too late.