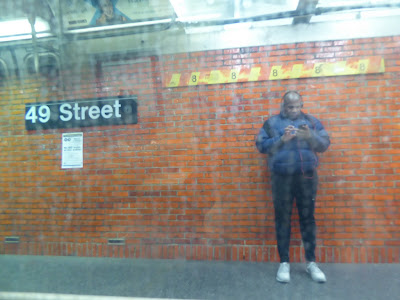 Flying back and forth on the R train to Queens all week, sometimes Astoria, mostly Jackson Heights, the trips felt like a  soothing cocoon.

As the world whizzed by, for a second Gramma and Florence were almost next to me in that urgent rocking.

Some people talk about the whiff of their mother's perfume reminding them of her or the smell of a dish their grandmother made that helps them feel the loss a bit less.

Florence and Gramma were terrible cooks and indifferent perfume wearers.   But it was the billions of trips I took with them on the subway, when we couldn't walk to where we were going, that held those intimate moments, not much said, all of us drifting in and out of next stop and closing doors - a brief reprieve from where ever it was we did not want to return to or arrive at.

The subway had been our home and during this week I miss them a little bit less.

Sunday Memories of When Normal Wasn't a Luxury

Sunday Memories: Over the Hills and Through the Woods to Grandmother's House We Go

The Ride Home From Summer