In Search Of Great Hotels 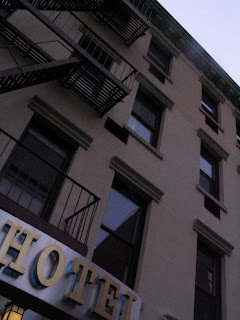 City Of Strangers returned to Hotel 17 and those days of home and haven that had a texture now rarely found in most neighborhoods.

Several weeks ago, walking back from a job I never thought I'd excel at, I saw where I had once hoped to live.

It was called the Pioneer. It didn't look this good then.

My father bought a car when we were teenagers so he could keep his job which had been transfered to Long Island, a place people moved to but didn't work in.

Occassionally we used the car for family outings which produced as much dread as staying home. As the car would bump across Broome Street toward some portal out of Manhattan I'd stare at the Pioneer Hotel sign wondering if I could run away there. Close enough to home that I could escape to the hotel by foot but offering a promise of my own portal out of one place and into hope.