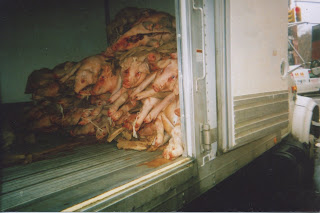 ...and the swine... he is unclean unto you - Leviticus

It wasn't that we had to wear skirts during the High Holy Days even if we were on our way to music school and it was Shabbos to boot. For a brief time it was the special every-once-in-a-while treat of crispy bacon - the whole package - all mine that Florence would make me never on a Saturday, but always on a Sunday with the windows open. I loved it more than the once a week Hostess cupcake I got to have at my gramma's house.

"Hoy Hong makes the best pork buns in the city," my father would announce as we walked on Mott toward another once-in-a-while treat. I never questioned him how he knew that. He was all knowing and he knew Hoy Hong made the best pork buns. A steamed white cloud with something delectable inside. Almost like a Christmas present.

Stuffed into a paper wine bottle bag and dragged to JHS 56 on Henry Street a reluctant lunch was much too often a ham sandwich on dry Arnold white bread with an unappetizing apple lurking about for dessert, but I looked longingly at my classmates' exotic and (to me) rich people's food of peanut and jelly sandwiches on Wonder bread and extra stuff like pudding and cake and things that came already made from the supermarket. And soon after that I moved to a place where chocolate donuts were the norm and I got to eat as many peanut and jelly sandwiches as I wanted and soon after that I got a job and could order anything at any place I wanted.

But when the movie BABE came out and confirmed that pigs were smarter than dogs, all I wanted after watching it was bacon and sausage and then even more bacon.