Sunday Memories - River Runs Through It 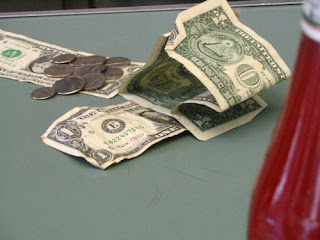 The internet hadn’t been invented yet.  So, at 3am when I couldn't sleep or after a night of futile socializing and too depressed to go back to an empty apartment,  I came here: an all-night diner with a counter that swirled like a river you see in pictures taken from far, far away ... like the moon.

My favorite spot at that beat-up counter faced Second Avenue.  Sat there for years - staring out the window hoping "he'd" see me and come in to renew love (“he” did several times) or writing all the stories I knew could change the world if only someone would read them.

The two old counter ladies - called Jurassic Park behind their back by all the dishwashers -  fed me coffee, which was all I could afford  in those days (except for an occasional splurge on borscht).  And once, when I started to cry at a finished love poem that didn’t have a happy ending, the red-head one even patted my hand and got me a free refill.

Besides the Jurassic Park ladies, I was almost always the rare female there, surrounded by men also sitting in their favorite spots and talking themselves non-stop out of their own darkness.

*** the 4 foot 9 inches cop who insisted the Thompkin Square Park Riots was the fault of only one or two corrupt cops because he knew all the guys at the precinct and they were straight up and honest.

*** the Robert Redford look-alike who loved astrology and whose daughter didn't talk to him and in five minutes you understood why.

*** the unshaven, slightly slovenly, plump "theater-something-or-other" with papers sticking out of his beat-up portfolio who talked in ferocious whispers to the Robert Redford look-alike.

*** the short-order cook who broadcasted his marital problems while flipping late night food on the grill and demanding explanation from the cashier about why his new bride should get so upset after he locked her out by accident. Again. For the third time. And did any of us think he was trying to tell her something because he didn't think he was HE JUST FORGOT!?

Night after night all of us floating on this old counter…and when the streets took a breather from muggings and other assorted crap, we all (quickly) wandered home.

Then the owner's grandson went to restaurant college.

And shortly after, light fixtures got changed, new murals went up, walls came down and the counter was amputated into a brief moment of no-view-not-worth-sitting-down.  All the regulars regularly peeked into the new place as it slowly filled up with folk we didn’t recognize.

One day I ran into the Jurassic Park ladies by the Polish Meat Market.  Hugging me, they kept insisting it was the same and urged me to come back.  So I did.

But it wasn't the same.

The borscht came in small expensive bowls, the pierogis changed into Northern California inventions filled with goat cheese and sun-dried tomatoes and soon the Jurassic Park ladies were gone and in their stead were new waitresses who were young and tight and pretty and impatient to the many new diners who thought they had found an authentic East Village eatery because they were being treated so rudely.

And soon after that, splurging on a more-expensive bowl of borscht, I recognized only one face in the new mural the famous artists did for the reopening - a tiny memorial to an old drinking buddy who died of a heart attack on the corner of 7th Street and Avenue B in 1979.