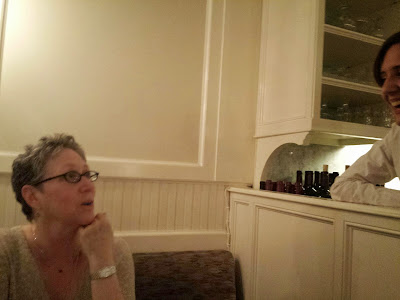 I have never known her to walk in a room and leave it unchanged.  It's just never happened.

I have never known her to talk to someone and not change their lives.

I have only known her to melt people's fury, resentment, fears, crazy-ass beliefs into their hearts and re-introduce them to their own sense of hope.

Like above.  We were at dinner and by the time we paid the check the young waitress (that's her on the right) was clinging to every word Amy said.

And it was Amy who once told her story to an auditorium of 500 people about becoming a writer even though she was told she should only be a secretary; how she fought through her own doubts, once facing a blank wall in a Paris hotel and determining right then and there she would write the best screenplay ever (which she did); how she sought the words that would propel her always forward.

It was because of her and that Paris wall, that I too faced a blank wall in an Argentinean hostel, determining right then and there....

She was the one after reading something I had stuffed away who said "This must be published." What if I had not heeded her words?   This wouldn't have happened.

And those words she sought that she so generously shared with me?  They are my roots, my touchstone and my daily commitment to keep facing blank walls and always propel forward.

But that's what Amy does.  She moves through the world and leaves it transformed.

So it should be no surprise what she recently did.

Click on that link.  Click.  And it will be like Amy was right in front of you and before you realize it your life will never be the same.

Shades of Blue: Writers on Depression, Suicide and Feeling Blue