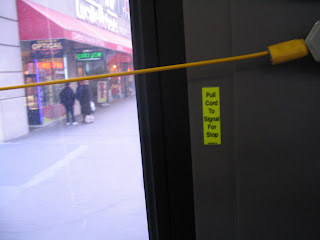 And since we didn't have a television, excitement had to be found where ever we could find it and what better place than public transportation. The subway had that front car window, as good as any Coney Island ride. But if you were on a bus, you had both the window and the chance to pull the bell. A ride with sound effects! Couldn't be beat.

Then somewhere along the line they modernized the buses and those long cords begging to be yanked so the bells pealed like a Sunday church disappeared. Now most buses had subtle strips that only rang on the first request, thus sparing the bus driver from going batty from constant dinging all day.

And then today in the middle of a lovely meandering down Fifth Avenue on the M5, I looked up from my window seat only to see a cord. With a little sign:

Pull
Cord
To
Signal
For
Stop