Last Of The Landsman* At The Pass 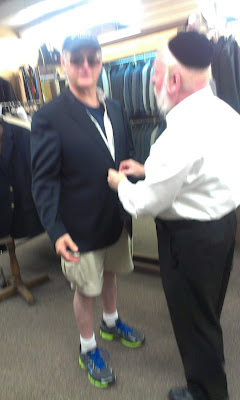 We didn't know what hit us, but it was very familiar.  Like home you didn't know you were missing until it was right in front of you.

We were headed down Orchard Street to the Untitled Store.  Towels.  I wanted to look at towels and, as we crossed Grand Street, I wonder what it would be like to have a set of towels not fifteen years old or mismatched.

Mr. Gluck didn't head us off at the pass. We couldn't even get near to the pass.  He headed us off half a block away, one look at the Mariner, he knew a good suit would be the answer to everything.

And before we could stop ourselves, Mr. Gluck, clearly an expert at herding baby ducks, sheep and middle-aged strollers, got us into his store filled with suits and coats and jackets and ties and they were beautiful.

And we said no,  no, every step we took deeper into full wardrobes for sale we said no, every cent we had was going to root canals and fresh paint on old walls so, no, no, but yes tell us stories of your father who made the store we will tell you stories of Poppy who lived around the corner and was one of the first striker to get arrested and...

I don't know how he did it but before you could say thank you or oh really or yes such a shame or even no! how old is your father, Mr. Gluck had the Mariner in a suit jacket you couldn't even imagine the cashmere the silk the flow the feel the dark blue so subtle it didn't have to say a word it was so intriguing but you could hear it singing ok so maybe the lining looked like you'd wear it to an over-the-top bar mitzvah but still...

The price was what that root canal costs, so I said NO in the voice of authority because when a Jewish woman speaks in a clothing store that's the end of the discussion, at least when it comes to spending root canal money we don't even have  and I said (as a joke) we'll come back and maybe you'll get married in that, and Mr. Gluck said married again because in his mind we were and he turned to the Mariner as I laughed so hard and said, see?  A happy wife, a good couple... then dragged me over to the pants on the hanger to look and feel and touch and just try to wrinkle that cuff you can't, for you I make a good price...

So, if you want a suit that flows and feels and sings and is cashmere and silk and you can't wrinkle it it is such a good fabric, go... go to Mr. Gluck.  It won't be hard to find him because all you have to do is walk down Orchard and once you cross Grand...

*Landsman: A fellow Jew who comes from the same district or town, especially in Eastern Europe.

Sunday Memories - A Visit from Another Her New York: "It Looked Chaotic But It Was Quite Organized."

It Was His New York