This is one of my favorite picture of Dana. 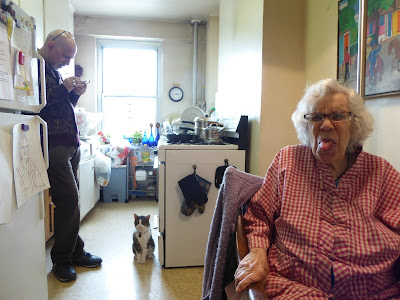 That's because she saw me raise my camera and then waited for the exact moment I snapped to stick her tongue out.

There's a lot of waiting when it comes to writing and sometimes it can feel like full out avoidance.  However, after a TV-watching-marathon of British women going into labor and giving birth to babies, perfect timing seemed to be more about allowing life to emerge on its own terms, rather than planning and making a schedule.

Sure, there's lots you can do to help, like bouncing on a ball or screaming or eating chocolate pudding -  all strategies that work for both birthing and writing.  But, mostly you gotta bow to the forces that be, because they're just going to do what they need to do.

So, while allowing words to emerge, an encore about what Perfect Timing sometimes looks like.

The frame was too high on Dana's new bed. Getting up was like rock climbing and getting down was the Giant Salom but without the snow.

So we ordered a new one, thinking it would arrive in a couple of days.

But then the new computer system didn't work. So the frame arrived a week later.

We thought oh so we'll come down on that day.

But then Dana asked we come the next day.

I promised we'd be there at such and such a time, but of course we got there almost an hour later.

Then the Mariner couldn't get the frame to line up and I didn't help by insisting that one side was longer than the other when in fact it was just angled more like a trapezoid and he was trying to re-angle it in between me whipping out a 12 inch ruler once used in PS 110 by Dana's son to prove that in fact that side of the bed frame was longer.

Finally the bed fit perfectly and Dana could sit down on it without any athletic training.

She insisted we stay for lunch and have tea and kaiser rolls, herring and lox, cream cheese and butter, and lots and lots of rugelach. The apple pie we passed on.

There was no way we could use the frame that was too high. It was pointless to keep it. But it was a really good frame and no one wanted to throw it out. So the Mariner taped up and stuck a piece of paper on it that said "free bed frame! new!"

Before we headed down to the communal recycling room, Polly the cat needed love. "I want a picture of that!" Dana said. So the Mariner rummaged through my crowded bag of screwdrivers and shopping bags, found the camera case, pulled out the camera and took a picture. The second after he clicked the shutter, Polly had enough love and jumped down.

I forgot the right elevator was the shabbos elevator, stopping on every floor from 1 to 20. So we got off on the 14th floor and waited for the not-for-shabbos left elevator. The numbers let us know whoever had gotten on at the 12th floor was being detoured up to us.

We stepped in with our almost brand new but too high bed frame and there was an almost coordinated, neatly dressed, middle aged couple, laundry stuff in hands, annoyed their trip down had been interrupted with a brief trip up.

Until they saw the frame.

"Are you giving it away?" they both asked.

"Yes! Do you want it?" asked the Mariner.

"Yes! We need one!" and without much ado, he handed the couple the barely used, month old, too high bed frame.