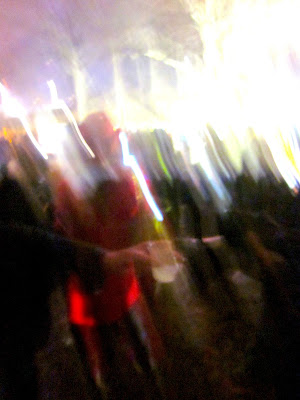 The first real New Years had also been in Central Park. We were 13, or 14, or even 15 years old.  There was a party and not just any party but one with boys and after we all gathered at the 72nd Street apartment to shake hands and see who was cute, we headed off to the bandshell to dance to a rock and roll band.

The park was practically empty.  After all, it was 1973.  But who cared!  We jumped up and down in rain puddles, thrilled about the years to come.  Nothing felt as good as my very first kiss with that cute boy that night.  That quickly changed when my friend's mother caught me necking with that cute boy and let me know exactly what kind of girl I was.  New Years and kissing didn't feel that good for a long, long time.

Three decades later, the park way way less empty and much more busy on New Years Eve.  After all it was 1999.

A couple of hundred runners danced about in costumes ready for a 2-mile trot and fireworks.  Generous friends had invited me along, knowing my 39th year had been a high-speed fiery descent to bottom.  I remember standing in the crowd of healthy, tall runners who were all shouting happy wishes for the run-into-the-new-year and thinking "I must become the joy I want because I sure as hell am not going to be joy just standing here this depressed in a crowd of skinny tall healthy people shouting joy."

I barely made the two miles, jogging in practically last after the group of 95 year olds who were basically strolling along.   But,with each aching miserable plop of my feet I vowed through gritted teeth I'd never have that bad a year again.

It was fourteen years later than that joyless New Years and literally four decades after my first real New Years kiss. A New Year had come, the park now packed with billions of people, and trillions of runners,   After all, it was 2013.

The fireworks like zillions of umbrellas bursting colors above our heads, good friends, their children, the promise of a new year and the gratitude of a damn good past one, me and the Mariner danced and shouted joy and kissed with delight a new year, a new year, shona tova, a new year.