Over the olives before the dinner, she said, "wait say that again about loneliness..."

Loneliness wasn't like a top-40 song sung in the 60's by a waif-like boy walking along British puddles while every waif-like girl watching that little movie screeched forward profoundly sure she was the one who could make it all better, if only she could walk with him.  Besides, that boy was getting a lot of action being so forlorn, no way he'd give up that easy way to get laid.

No.   Loneliness was more like how Florence and I had both traversed our city the same way; walking through life, going from bed to job to dinner table to the familiar sidewalk towards the familiar brick apartment building, at each stop sparkling out charm and entertaining conversation, but in between visits all these tiny corners appearing out of darkness, offering space for everything we did not, could not say. 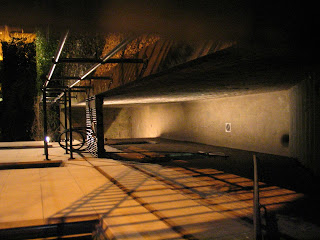 "Wait, explain that..." he said over meat and rice and salad and wine.

Well, breaking karmic chains was making sure Florence's grief would end, end with me and perhaps with the younger ones or maybe with anyone.  It didn't matter she was dead.  That never mattered.  So often we were just emotional sound loops of our parents' secrets.   Who were loops of theirs and theirs and theirs and...

It was like quitting smoking, quitting loneliness was.  Putting it down slowly, over and over again; each day, instead of a secret silence,  now filled with words said out loud in bed, at jobs, over dinner, on the familiar sidewalk towards the familiar brick apartment building until one day all those dark corners were just visual echos of everything we had not, could not have said and loneliness was just a memory.