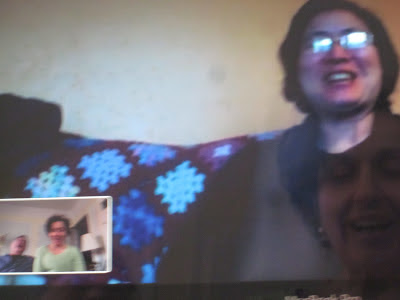 I finally went through the two boxes of letters from Florence's life that I had hidden away years ago after I brought the rest of her estate home.

The first box was packed with a ton of handwritten mystery notes, both in her elegant penmanship, and in others. Pictures of people we clearly weren't related to, obits of girlhood friends, two 1934 post cards from an uncle hiding out in Ubekistan from the anti-semites in Kiev, poems and letters from the girl she grew up with the one she loved, my father who she never spoke to again after 1977, my sister's missives from age three into her 50's, and attempts from me to either be a good daughter or to break through to something akin to understanding.  It was a collage of her life.  Up to a point.

The second box was after that point.  Packed with greeting cards warbling love and pop-out hearts and cute animals professing forever-yours, piles of letters from her and from a lover twisting in desire and missing and sharing of the day, and notebook pages and pages scrawled by a furious spurned girlfriend sobbing, raging, pleading, demanding, begging, defending a relationship that suddenly didn't work anymore.  No matter what card was open, what letter unfolded, desire and pain opened and unfolded with it.

There are few, if any, such letters in any boxes I have tucked away.  Everything in the past decades have become more and more immediate and transient, allowing a history to be easily deleted into electronic garbage pails.  And the mysteries of love gone bad or good or just gone have been unraveled through modern versions of therapy and self-help and Oprah.

These days offer the zen of Now, a space between 'then' and 'soon'.  In that cradle of peace and with some clicks on a keyboard, a living letter appears in a friend's face, a letter that lasts as long as words are spoken.  That unshackled moment might be made at the price of a story constructed from colorful animal pictures that get piled into a box, but, staring at all those letters and cards and notes, I was left just as puzzled by the secrets that died with Florence as perhaps anyone, seeking answers about me. might be staring into blank screens and electronic garbage pails, only to find them empty.

Letters From The Deep: Part One

The Exhaustion of Diaspora: Part Six

When A House Become A Home