Sunday Memories: A Room Of Her Own. With a Door! 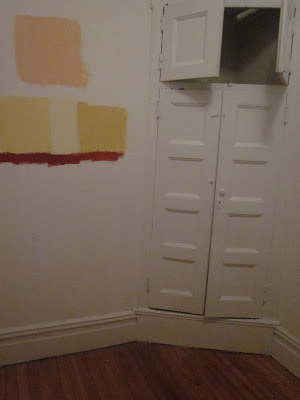 In the 1970's it was the 'cat' room, along with boxes and stuff not being used by the three young men who sprawled through the rest of the house.  The cat didn't mind.  As long as he could get to his litter box.

Not sure what happened to the cat when everybody moved out and me and my friend moved in.  But the room was empty.  So we put in all our stuff that we weren't using as we sprawled through the rest of the house.

Those were the days where we each delivered our share of the rent to Mrs. Schneller, who lived on the 6th floor and rented out sheets and towels to the men living in the S.R.O.s.

Don't remember the ins-and-outs but one day that friend moved out and another moved in, bringing tables and lamps and posters and dishes and that room became a little dining room where morning cigarettes were smoked and post-party gossip shared.

And then it changed again, became the "guest" room, a bedroom with a loft bed brought from Brooklyn, resurrected as one apartment ended and our new relationship began.

Years, years, years, until life changed again, that new relationship no longer new, ending slowly into boxes that got packed up and shipped to unknown spaces waiting for a bedroom to be resurrected.

That room stayed behind, became a way station for an old friend needing a bed because he was too sick go home after work and then after him, friends also leaving relationships no longer new until...

...the room fell away, the wood packed away, walls painted, and a new roommate made it a fragile bedroom from another time filled with delicate fabrics and soft empty air.

And soon after that roommate began a new relationship in a new home, an old roommate moved back in.

Those many, many years that followed saw much change fly around that room, but the room didn't change much at all.

Home was, as it had been for the past 37 years, a myriad of footsteps and hellos and histories and stories, a constant array of memories sitting around the dinner table talking all at once.

One day became different.  The idea of home stretched beyond the small room and big shared space into a place where family could lived and friends might visit.  The room fell away for one last time and now it awaits, awaits me after all these years to sprawl beyond finite walls and fear into imagination born of solitude.

Sunday Memories:  In three acts G. dies in Manhattan in 1993