You Got Your North Star. I Got Mine. 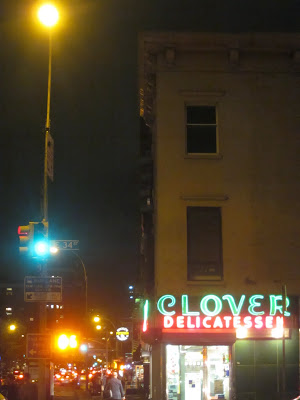 Sailors have the north star.   I have the Clover Delicatessen.

It's been in business since 1948.  Same family runs it. I know this because I called them tonight and asked.

I have been walking by that deli for 40 years.  Second Avenue was my way home.  No matter where I was coming from.

All those nights walking back from Jutta's on 89th Street and West End, or when I was working my way through City College, and had a part-time job on 93rd Street and Third Avenue... Didn't matter.   The minute I hit the Clover corner, I knew I was home free home.

One summer I even worked across the street at Allen's Restaurant.  I was a busboy.  I was saving up enough money to go to China.  It was 1986.  Nobody went to China then.  Except maybe Nixon.

The Clover always had these cookies in the window.   The ones that look like different presents under a Christmas tree.  Year after year after year, the same cookies.   Sometimes I wondered if they were actually the same cookies being kept as window dressing.  I promised myself for decades that one day I was going to go in there and get every kind of cookie they had.  Then I found out cookies made me sick.  I should still do it anyways.  At least when I have a day off the next day.  Or can fit back into my jeans.

I only went in once, maybe it was the 70s.  Maybe it was the 90s.   The place just seemed too fancy for me. After all those cookies were really pretty.  Mostly I'd slow down and peek inside and then ... look at the cookies.

It didn't matter I never went in except once.   Walking by that warm light pouring out onto the nighttime street, that was almost as good as eating a cookie.  Something sweet and beautiful that lets you know you're almost home.