Desserts of Our Times: Pickles 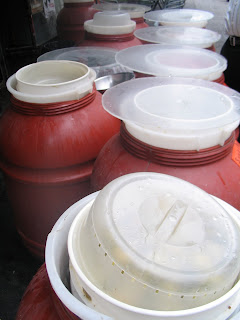 Gus's Pickles had always been on Essex's Street. Like forever forever. Past the sporting goods place where all the stuff in the window we couldn't afford and past the religious article place with the outside winding stairs that I finally went into in 1992 right after Chicken Pox and right before the holidays (nothing says Merry Christmas like a Star of David).

(Later I found postcards of New York with this block on it and with Gus's on it - postcards that screamed THIS IS REAL NEW YORK SEE HOW UNIQUE IT IS??!! But by that time, everything had moved, changed, disappeared.)

Gus's after like forever and forever and like everyone else during the boom lost their lease and then there was that unhappy business with the employees who moved up Essex's and opened the Pickle Guys and so finally Gus's landed on Orchard across from the Tenement's Museum. It went from a shopping destination with people shouting orders for something they needed in their daily life, to a brief moment on a walking tour where a carefully modulated voice quietly told of the Pickle's Place in Lower East Side Life at the Turn Of The Century. And all the tourists would politely and quietly request for fifty cents yes a pickle?

Far cry from crowds screaming "Gimme five more dill and the tomatoes, you got the tomatoes in there? and wait another sour...."

To us a sour was up there with Snoballs in Treat Heaven.

In Jeremiah Moss's Vanishing New York, I read Gus's was moving. I went to get a pickle and to ask the whispered question. "Did the landlord raise your rent?"

"Nah," the lady said. "We're moving to Brooklyn. That's where our customers are. Around here, nobody eats pickles."