Sunday Memories: The Memory of No Memory 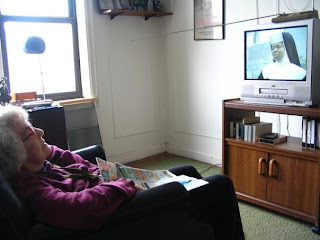 Dany asks if Florence ever didn't know who we were or where she was.

There were plenty of times, but I recounted the two moments that stuck with me the most.

One was in the ER when she tried to comfort me and urge me forward but couldn't remember any of the words. So she tapped out rhythms, counted out beats and conducted a bit, her thoughts and ideas buried deep in the language of music theory she had taught me since I was three.

The other moment was one of the many days we sat together watching movies we had just seen a week ago. Her favorites were Singing In The Rain and Sister Act. On this particular day, I took a picture of her visiting with Whoopi, somehow knowing it was time to capture it because it was time that was running out.

On that day, I did what I occasionally did - ask a bunch of questions to see where her memory was or wasn't. I told myself I was just keeping track. But part of me still didn't believe she wasn't leaving and my asking was me trying to prove it was all a mistake and that she was in fact getting better.

So I asked what I usually asked. "Do you know who I am?"

This day, though, was just like the other times, only worse. Her face got that terrible look on it like a little kid who knew she was failing in front of Teacher but couldn't remember what the answer was and was trying not to cry in front of the class.

And just like the other times I felt terrible for trying to prove I was wrong about everything going wrong and right about her returning home to the way it used to be.

I don't know what got into me, but without thinking I asked, "Do you know who Louise is?"

She paused and for a brief moment looked as she always had when pondering something important. Then she turned to me and tentatively answered, "Our boss?"

Somewhere, deep inside her muddled brain, my mom was still home.