Sunday Memories-Home: Schneller and Her Boys 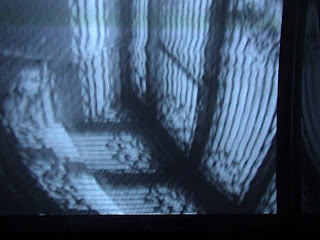 Schneller lived on the sixth floor. She still had her German accent but not her lips. Those she painted on like a Jackson Pollack. Which she did every day before taking her post in the late afternoon on a wobbly folding chair outside the building. Warm days only.

Her hair was thinning and dyed something like inhuman red and she no longer had the shape of a person – it was more like a toad with tiny legs sticking out. The only rumor I ever heard about her was that the building had been in her family’s and that her lover had died in World War II.  Clearly she had never gotten over it.

She rented several of the grand old apartments out as SROs, weekly linens included, to a gaggle of old men.

Tommy looked like Popeye - tough, butch, muscled and toothless, a cigarette always dangling from his lips.  He guarded the building at night, hanging out on the stoop, making sure the heroin addicts didn’t steal the lobby’s chandlers again. The ones we had were the crappy replacements of the real ones worth a lot more than the couple of bags they had gotten selling them.

Jimmy was Sinatra in a snappy fedora - if Sinatra couldn’t sing, was old, short and a fourth-rate bookie. He coughed a lot. That’s when smoking was only a nasty habit.

Mr. Martinez studiously collected stamps, was very, very short and very, very gentle. He got beat up and ripped off a lot but we weren’t sure by who. He put a padlock on his room. But he said it didn’t help.

None of us spoke to Mr. Lee unless we had to. One year he left the shower running.

We all put out our garbage in the hallway every night to get picked up by Otis, a stooped six-foot dark Black man who lived in the basement and socialized with the middle-aged overweight blond hooker from 11th Street who couldn't decide if she was Ukrainian or Puerto Rican. She kept changing her name, accent and hair color each week.

With a good deal of cheap booze, Otis had reduced his life to a tiny moment of feeling no pain. There were many many walls of congeniality and smiling dumb.  Even that night at 3 a.m. when I ran into him with his hooker friend. He gave me the exact same smile he gave me when I bumped into him picking the nightly garbage.

Walter also lived in the basement with Otis.  He was a light skinned Black man and handsome chiseled to beat the band but crippled into a bonsai of his former self.  He rarely smiled. His face reminded me of a scholar who had seen too much and understood how little he knew. On all the major holidays, he’d don his best suit and hat and, leaning on his cane, wait in the lobby for his daughter to pick him up. She rarely did.

One summer day the elevator broke after Schneller had taken her post outside. Everyone in building, coming from work going to dinner, had to make our way around Otis and Walter with his cane pushing Schneller up the stairs by her butt as she clung to the banister. 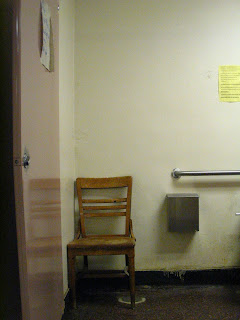 All day the Bathroom Attendant listened to other people go to the bathroom.  I know because for a couple of months I hung out by the makeup mirrors in between therapy sessions and job interviews.
She wore a quasi maid’s uniform, repeatedly offering paper towels in broken English that belied a sharpness and insight that only comes with starting life over at the age of 40 or 50 or 60.

Rather than deal with intelligence that could hear them in their most intimate moments, I watched her be summarily dismissed by the thousands of perkily dressed Mid-Western mid-management women snappily wearing their versions of the power suit with a Fortune 500 smugness at their New York conference before returning home to bland garden apartments or studios temporarily furnished for a pre-marital life.

One even demanded to know what that smell was and, at the risk of being complained about, the Bathroom Attendant shrugged a fuck-you-lady shrug and said “It’s a bathroom.”
Posted by c.o. moed at 10:21 AM 0 comments