His Ten Year Love Affair With A Keyboard 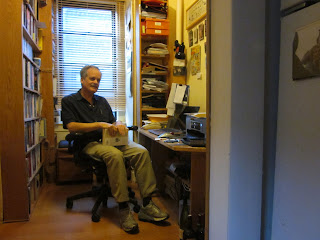 Even though we all knew Tom worked for the telephone company, he was a writer like the rest of the tenants in the building. Mostly rock and political criticism.

Then he retired from his day job. Dreams of writing all day instead of working all day floated before his eyes. "I had this plan," he said. "But things came up."

Like any writer facing any clock that counts seconds, hours, days and years, the desperation to finish something, anything was stronger than any interruptions.

Somehow, over ten years in between...

*family demands
*political upheaval
*political action
*the ebb and flow of laundry and shopping
*maybe in the evening
*sometimes in the morning
*when one of the kids moved back in
*when the kid moved back out
*with a few secretive trips to Ohio and Pittsburgh thrown in
*and skillful deflections of investigations from children and spouse concerned that a reenactment of The Shining was occurring in the little room off the kitchen,

....fingers found the keyboards to one of those big bulky computers and then to a laptop. And then a book got written.

But that's how it is in this building filled with writers, some with day jobs, some without, but all with fingers demanding keyboards no matter what the interruption. Like Tom said, "Here, you feel you're doing the norm by sitting and writing."

Tom's book, An Inconvenient Amish Zombie Left Behind The Da Vinci Diet Code Truth is now in the world. And in this building, a book is up there with a kitten being adopted and a baby being born.

Follow the non-stop action from the museums and cafes of Paris to the fast food rest stops and motels of swing state Ohio, as past and future collide to creat an apocalyptical present where people from all walks of life are pulled into a conflict that will determine the fate of the planet.

An Inconvenient Amish Zombie Left Behind The Da Vinci Diet Code Truth is a full length novel mash-up social justice response to the Left Behind series and pop culture critique of The Da Vinci Code with one eye on global warming and the other eye on every social trend and best seller in the last twenty years.

Tom Smucker is a retired telephone Central Office Technician who has written for over four decades about pop culture and politics. See www.tomsmucker.net for a sampling. He served for many years on the board of Deacons and Elders of his church, and remains active in his union. This is his first novel.

His collection of poetry, Story Poems and Polemics, will be published in the fall.