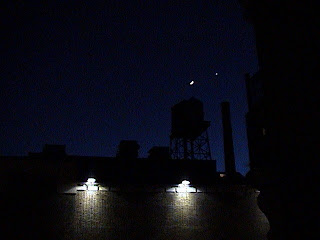 It was a bad week, that week in 1965. In a rare moment of having the brief upper hand I had taken my sister's head and banged it quite hard against the baseboard of our sturdy couch. I was six. She was nine and a half. In a hour she was in bed crying differently than ever before and in a week she was in Beth Israel Hospital with spinal meningitis.

I knew it was my fault. I believe I tried to tell my parents that in fact I was the cause of my sister being at death's door with thousands of needles stuck in her spine. But Florence and our father, being destroyed human beings incapable of experiencing any more trauma than what they carried in their bones and souls and hearts let alone hear the anguished fears of a little kid may not have understood what I was trying to say.

During this time, an amazing invention heralding great luxury entered our home facing the Williamsburg Bridge. A dimmer for the living room "chandelier." It was not the ordinary light switch that went on for the piano students from the neighborhood and off when we were not in the room. It, like silk gowns in the movies we watched, ushered in light with elegance and grace.

I was given strict instructions by my father to never touch it. However, in a not so rare moment of refusing to follow orders I stood before that new knob one evening and decided to know the power of the dimming. My sister in the hospital, my father somewhere in the mysterious travel between work and home, and my mother, oddly enough, not in the living room at her piano, a place she spent more time in than in the embrace of anyone who loved her. I was alone and I was ready to go on tippy toes to fulfill my mission and satisfy my desire.

I gently turns the knob and the lights glowed. I gently turned it back and they faded and turned again and they glowed. It was better than music. It was magic and I glowed them again and then suddenly the room went black. Frozen in terror, I looked at the living room light. Not working. Then beyond the light, out the window, I saw worse. The bridge and the entire Lower East Side had gone black as well.

Florence came stomping back from where ever she had been and went to the building's hallway. Neighbors' voices filled the stairs. There were no lights anywhere and with this being November, our entire world became very, very quickly very, very dark. The horrifying truth faced me. My act of disobeying my father had broken the lights of New York City.

All the Shabbas candles came pouring out of all the apartments and lit the stair banisters into a magic fairyland, my father found his way home from some darken subway station or did he walk over the bridge that night? I can't remember. All I remember was being so scared of the dark, I clutched Florence's skirt and refused to let go until, needing to pee, she refused to let me into the bathroom with her. So I stood outside the bathroom door, in the pitch black, and slowly died inside from the knowledge that this was the fate of a destroyer - unloved and in the dark.

The next day or so my parents and I walked up to 15th Street and 2nd Avenue and waved up to my sister on the 9th or 17th floor of the hospital. She merrily waved back. Beth Israel had its own generator and she had been spared the dark.

Of course it was just a bunch of rats in some power station somewhere, my sister returned home well enough to continue being my sister, and nine months later a whole bunch of babies appeared on the street. And years after that I understood that my dimming and glowing the lights was just bad timing on my part and made for a great dinner story to friends who didn't grow up in New York City and were easily impressed.

But a few years after that, the internet was invented and someone introduced me to Google. The first thing I looked up was causes of spinal meningitis. And there, in very clear language, after bacterial and viral, were these words: "a traumatic injury to the head or spine."