While transforming a house into a home, and a home into dreams come true, revisiting the search.

The West Side Train Yards - soon to be luxury high rises. 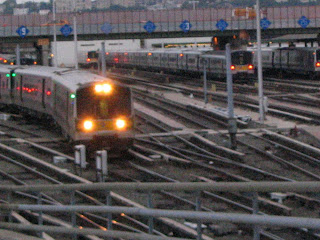 Before the rare purchase of that car, it used to be trains, subways or a Greyhound were the only way out, that is if we had to leave.

Airplanes were as exotic as suddenly living in a Hollywood movie. Beyond imagination. So we didn't imagine. Unless there was a death in the family in a very far away place like California and then only one of us got to go only once.

But besides death, the annual trip to Philadelphia to see aunts, uncles and cousins was about as much as we did.

After reading that Bach had lived and died within 60 miles of his birthplace I swore to my mother or my sister or my dad that I would never do that. I was going to go far and away and die some place that proved I had left.

Those train yards and those trains look like what my feet could do if I had kept my promise.
Posted by c.o. moed at 12:00 AM 0 comments