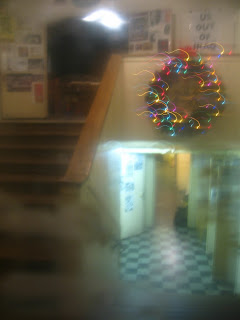 Before Third Street Music School moved to 11th Street and before it became a shelter run by the radical Catholic Worker, this is where we spent years of Saturdays and a couple of Wednesdays.

The block was no different from all the other blocks in the neighborhood - tenements and lots of dog doo on the sidewalk. With one exception. The Hell's Angels which mean it was the safest block in the East Village. Except if you fucked with them. Once someone parked near the bikes and accidently touched one of them. The bikers picked up the car and dropped it down and almost beat up the driver who was just a father dropping his kid off at the music school.

That rarely happened since most of us got to Third Street by bus or train.

Trudging past the Angels from the Avenue A bus stop, sidestepping the doo, and once tits were evident, sidestepping the bikers' looks, Saturday was an entire day of misery filled with theory classes, violin lessons, and orchestra rehearsal.

But in the cracks between all these obligations we raced up and down Second Avenue, sneaking into the exotic pet store, pooling pennies together for treats at the small and solitary candy store, and once in a blue moon blowing everything on a hot dog at the other famous kosher deli place on 5th Street. Karen's father said that if you checked any of the garbage cans on Second Avenue you'd find the bologna sandwich that Florence had made me for lunch. We never went further than Moishe's which was closed for Shabbas anyway.

The best part of the day was when our motley crew of mostly girls gathered at the top of the landing. There the handsome neighborhood boy sat making sure everyone got everywhere they needed to go. A viscous game of knucks would ensue, leaving bloody knuckles and swooning hearts and secret crushes which in my case didn't abate for years.