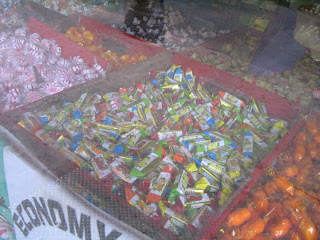 Until it moved two doors down, Economy Candy lived on the corner of Rivington and Essex. It was heaven but we were atheists and not permitted to enter.

Florence decreed No Candy Allowed with the One Exception of the piece of Bazooka Bubble Gum at Dr. Goldfarb's when we had to get a shot. What was Allowed: apples, steak, Mrs. Paul's fish sticks, Arnold's white bread, broccoli, more apples, milk and then apples.

So I stared. Pushing my nose into the glass to make staring enough. It was never enough. I always wanted more. I dreamt of money and freedom and having my own apartment where if I wanted to I could eat as much candy as I damn wanted to.

Now, two doors down from the corner, Economy pretty much looks the same except that the shelves are newer.

I notice I still stare, first through the window, then, after forcing myself to enter, at every single thing in the shop.  But I touch nothing because God, knowing I don't belong, might come down and send me back to apples.

Overwhelmed with choice, possibilities and a desire to avoid being smited, I end up buying something stupid. Like dates. And the little plastic wrapped hamburger made of sugar.