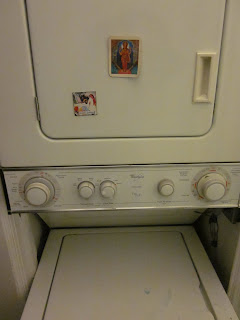 It started before Aunt Ruth died.

The Laundrymat on 13th Street, now an expensive dessert place of cereal flavored milk, was packed with cheap, big machines in a small crowded concrete storefront. It was run mostly by the Russian wife, and occasionally by her husband but never by her son who looked like her in sideburns. Tons of quarters were poured into plastic dishes for the machines and little boxes of soap were for sale under the always-on TV.

Just like an old bar, it was packed every day with its regulars. All the Chinese extended families from 12th Street, the differently-able adults from the residence on 2nd Avenue, a couple of former drinking buddies of mine from 13th Street, and the growing post NYU market-rate tenants who more often than not dropped their bags of dirty clothes off to be done for them.

Keeping my clothes clean and pristine hid the fact they were old or third-hand or that I couldn't afford new ones. So that laundrymat was important to me. I nodded to the same folks every week, jockeyed with frenemies for a dryer or a washer, caught up on my People Magazine reading and commended my favorite young man from the residence on his detergent pouring technique. (He was most proud he could do his own laundry.)

And then disaster struck. Someone's ballpoint pen stuck in a machine ruined most of my carefully preserved clothes. It wasn't the first time something like this had happened. But when I complained to the son he told me it hadn't happened, even while staring at Jasper John-like streaks on a beige windbreaker.

Then almost immediately after that, Aunt Ruth died and left me some money - just enough to buy my own washer-dryer unit.

Suddenly, like a few of my better off neighbors, I had the means to put myself in the realm of utter rich luxury. I was going to be able to cross over into a comfort of living I never could have imagined ever.

The minute my washer-dryer combo unit was installed I immediately started doing all the laundry I could gather, load after load after load. I forced myself to stop only because a friend was doing a reading at the Astor Place Barnes and Noble, now a luxury, upscale gym. The minute the reading was over I rushed back to do more laundry.

In the next 15 years, I loved that combo washer-dryer more than I loved several boyfriends. There was only one I loved as much and we happily did each others' laundry until the day he left.

Then some years ago, something broke and the washer tub tilted and groaned and scarcely swirled.

The repair guy, warning me never to leave the house while doing a load, quoted a number that was beyond my budget. Still, even half turned on its side and barely rotating, the washer kept my still modest collection of clothes pristine for a couple of more years. I thought it, like laundry with that man I had loved, would go on forever, regardless of broken pieces and limited abilities.

Until tonight. A simple load thrown in produced a flood from the insides. There was no more denying. My beloved little washer was tired. I coaxed another load on a gentler cycle but I could tell there was nothing left it could do.

For friends who grew up with such an appliance in their homes, my attachment to this has been a bit odd. But perhaps it is similar to say a kid in the suburbs getting his or her driver's license or their first car. It is a mark of coming of age. For other than that time of laundry and love, it has been my greatest success at bringing comfort and care into my home.

Goodbyr old friend
My old friend
There's somethin' I must let you know
I haven't said it much
I guess I've lost my touch
But, my old girl, I love you so