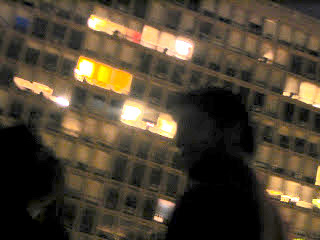 The apartment building spanned from one avenue to the next.

We were at a tiny rooftop party across the street.  Standing there, I felt like I was in that Fellini movie where all the little rowboats bobbing on the sea watch the huge ocean liner pass by.

Bernard gazed at the enormous building.   "It's probably the same size as a village." Since he is French, and France has villages, I assumed he was right.

Light from hundreds of TVs flickered across the hundreds of windows.   Bernard checked his phone again to see if Jacques left a message of when he’d be meeting us.

I took another picture. "They think their homes are unique and exclusive, but really they're just boxes."

Since I grew up in New York amongst sprawling apartment buildings of boxes piled on top of one another, Bernard assumed I was right.

We continued to wait for Jacques, watch the soccer club of middle-aged guys mug for pictures and count how many TVs were being turned on and off.