In Her New York, it was not a day celebrated in a conventional manner.  That's because in Florence's mind everyone was a mother... 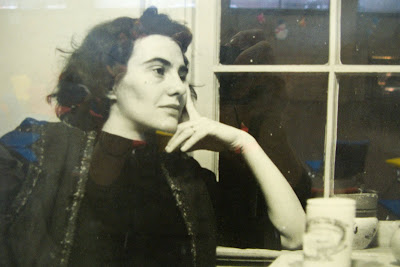 These were not the gifts Florence gave my sister or me. And although I inherited her love of lipstick, it's what is not found in a tube or a store that reminds me of my mother.

It is, instead, a ferocious, unending, tenacious, gut wrenching, miserable exhaustion, banging-head-against-wall, exhilarating 'til-death-do-us-part relationship with the work of an artist.

Personally, there are days I would have been just fine with a new dress or some blue eyeshadow.

An Encore of Sunday Memories -Return To The Promise Land 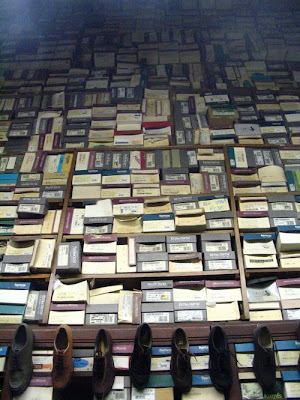 It was on Clinton Street between Rivington and Stanton. There was a cat clock that wagged its tail and rolled its eyes to each ticking second. The leather seats were burgundy and the lights were of course florescent. Only uptown stores where rich people shopped had real lights.

This was Kaplan's shoes. And we went there for our once-a-year-ugly-pair-of-oxfords that wouldn't become hip for another twenty years. In the interim, the meaner girls in their white go-go boots called me "baby shoes" which is devastating if you're only 8 and suddenly in the 4th grade with older kids.

Still, fashion exile or not, Florence's rule was whatever you picked at Kaplan's you had to wear out of the store. This showed commitment to the shoe you'd be with all year. And since it was the only items we always bought new, you had to really know if the shoe fit.

The pressure was tough. But those ugly oxfords were made so good, and Mr. Kaplan's measurements were so precise, somehow everything worked out, except for the part of looking like a dork from a-turn-of-the-century picture by Jacob Reis.

I spend the next forty years wearing shit that looks hot if only to avoid shoes and shoes stores like that. But there is a God and she does wear lots of shoes because ugly became even hipper than before, especially if the jeans were tight. It was time to wear something other than hot shit. It was time to find a place where the oxfords were made so good and the measuring so precise.

And when I walked in I felt Home.