Message In A Lamp 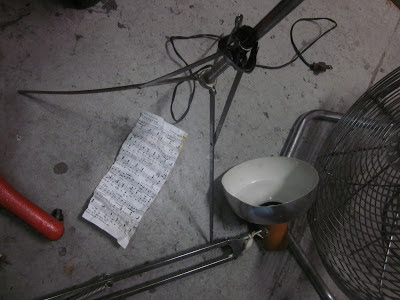 Usually when fate wants to send a message, it puts it in a bottle.

This one came in a lamp.

Joni had made it out of a music stand.  An electric blue 1960s or 70's metal ball was the lamp shade and you could make it taller or shorter.

Florence kept it for years.  It charmed her.  Not so much that it was a music stand, but that Joni had made it.  And during one of their last visits, all three - the lamp, Florence and Joni - came together in the same room.   (That's the lamp all the way in the back by the window.)

However, Florence had even less of an idea than I did that things could be repaired or healed or improved or made better.  What was awful was awful; what was broken was broken.  And only a swipe of an attempt could be made before returning to what really mattered - practicing, writing, pondering and then practicing again.

So, in the place of repairmen, things were slapped together in bizarre ways.

Which is how that note, worthy of a bottle, was found.

In these halcyon days of making things better, Gloria at NY Brass Lighting was unwrapping layers of electrical tape that kept together the music stand lamp.  From that sticky mass, a piece of folded up paper fell to our feet.

Worried it might contain a message or note only I should see, Gloria said, "You open it."

It was a piece of sheet music, torn in half, folded many times into a wedge, stuck between broken hinges and taped to the music stand.

I took a closer look.  It was Chopin.  A nocturne.   One that filled childhood mornings with the grief of summer light.