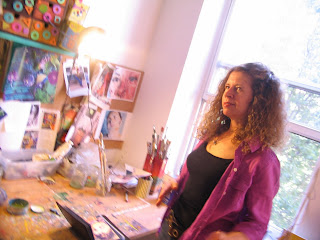 It had originally been one of only a couple of rooms in an apartment in a building filled with squatters on a block with lots of drug dealers and she was a single woman.

And when she steps into this room to paint, either during brief weekend afternoons or on the night shift, fear of failure stays outside and she can go face a painting that is pissing her off.

There is nothing in this room she can do wrong.