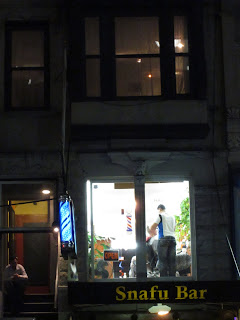 The name of the bar gave me a chuckle. My mom used to use that word. She would have fallen over in a fit if she knew what that word actually was. In 1941 Don Taylor and Johnny Paup of the Army Signal Core were making words out of 5 letter code groups....SNAFU...Situation Normal All F****d up. Mom was such a lady but there she was using that expression in all innocence (or maybe not).
Glad to see you have your camera. Hope the beast performs as well as the last one.

Wow! Thank you so much for that. I didn't know that.

Melanie, It's a powershot canan SD 1300 point and shoot. What I want is to upgrade to the sony nex5 in January after the holidays. this has an iso up to 1600 which had changed my night shoots a bit. love the expansion.