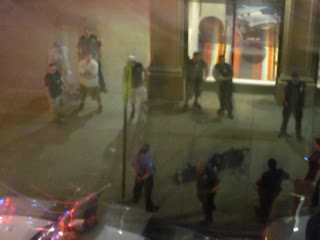 Possibly it's good that this is not normal anymore.

My first thought was a body bag, too.

I remember free drama always happening at the Key Food on any given night. Once, a junkie was doing an awesome job of swaying, yet avoiding a store employee who wast trying to corral him into a corner to grab him. He kept flailing his arms near all the tomato sauce jars as little old ladies obliviously wheeled their carts around him. FDNY showed up, but couldn't get the stretcher through the checkstands. Meanwhile, the junkie finally went down, taking out a huge swath of cleaning products with him. No one could get out of the store because firefighters and EMTs were in the way, they couldn't get in to help the junkie, and the store was a mess. I haven't seen anything like that in years.

omg, Goggla .... and what was even more omg was reading it I was like been there done that - it really was sooo normal... brilliant recounting! thank you!