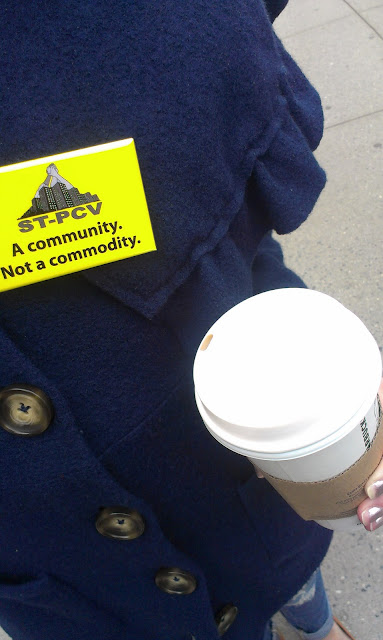 A couple of friends lived in Stuy Town.  It was, like everything else in the city, I guess - dangerous even with all the trees and the fountain that didn't always spurt. In those days you just walked where you were going, and being on the lookout was like having a token in your pocket.  Prepared.

A whole lot of teachers lived there.  So did everyone else who ran the city - like the post office workers and sanitation and the firemen (and then the firefighters when they let in women) and people who worked in the neighborhood and the business owners who sold us frames for glasses or pictures or a bottle of booze or sponges to clean the counter.

I went to Stuy Town once maybe during college or high school for a party.  A pain in the ass to find the front door of her building.

And after that, I went there day or night, by myself when I needed to hear what my soul was really saying or with friends, with lovers, with hopeful possibilities.  I went there with delicious babies and little kids so they could play in a really cool playground.  I went there with people I loved and cared for. Dangerous or not, it was quieter than Second Avenue.  Sometimes you just need a little quiet.

The city got less dangerous, the trees got greener and suddenly all these bushes and flowers were all over Stuy Town.  And then one day that fountain was up and running.   That place was like having the perfect country place with a 10 minute commute back to the city.

And everybody who ran the city still lived there.  Like the retired detective who told us about a great Italian restaurant and bar that wasn't filled with post-college kids doing East Village gourmet.  And the freelance arts administrator who put together projects that made upsetting ideas, like um other religions, palatable and understandable through documentary collections, and the 89 year old writer who had grown up on Ludlow Street and talked to me about journalism for women in the 1940s after complaining about how bad Ludlow Street was (a tee shirt for $60? you crazy?).

The biggest difference was that at night it wasn't deserted.  It was filled with us, walking dogs, smoking a cigarette, kissing on a bench.  Sitting by that fountain which was now up and running and very nicely lit.

But danger's a broad concept.  The danger I grew up with - the one that taught me how to walk from dark corner to dark corner - that kind of danger now is on tv shows or reported with indignation in the Daily News because it's just isn't expected.

No, now there are new kinds of dangers in the city and now in Stuy Town.  Owners attempting to illegally evict people or change rent laws or just ignore them and rents only manageable for much wealthier people than the ones keeping this city running and then new owners getting new rulings and changing things and stores that sold what you needed being kicked out for stores that sell things you really don't need or can't afford or a lot of times, organic frozen yogurt.  And people, like the ones who keep this city going, suddenly not living in the neighborhood but living in a real estate market.

There are bedbugs and rent increases-or-else-move notices.  There are elevators not working (and when you got older folks that's dangerous).  There's management entering apartments without permission (which is also just weird) and there's been robberies without force entry.

But, with those dangers comes the danger of pissed-off New Yorkers.  You know, the ones who keep this city running? When you piss them off, they get organized.  Now, they're not just called neighbors.  They're called a Tenants Association.