This is Bluestockings.  It is one of only 13 radical bookstores left in the United States - 100% volunteer-powered and collectively-owned, fair trade cafe and activist center.

And the best books and reading series in the city!

This is Vittoria repetto, the hardest working guinea butch dyke poet on the lower east side. 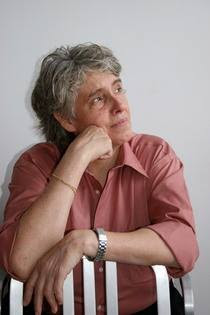 Her poems have always stopped me in my tracks and changed my life.  I keep one near my desk to remember how a heart goes on...

She started the Women’s and Trans’ Poetry Jam series in 1999.

And 17 years later it is still going strong.   Once a month on a Tuesday night at 7pm the mike opens (women and trans only) and no matter whether you have been writing for years or just started that afternoon you can face an audience and read your stuff.

And no matter what, that mike is open and it's welcoming.  At least for eight minutes.

And at 8pm two featured writers/artists are invited to step up to that mike.  And no matter what, that mikes is open and it's welcoming.

The series flourishes at Bluestockings.  Only in a radical bookstore could a radical reading series flourish.  And because of that writers so rarely heard from get to step up to that mike and change the world.

This Tuesday, 26 January will be no different.

C.O. Moed's WIRE MONKEY: it’s almost the 1980’s and Bets, all of almost nineteen, once again gets jettisoned from the ancestral home on Columbia and Broome. With nowhere to go she returns to her second home – the East Village, determined to start a new life, if you call stealing, getting drunk on St. Patty’s day, selling rings door to door, punching your best friend in the face and selling off the family possessions starting a new life.